With all there is to see and do, it’s no wonder Como Park Zoo & Conservatory has been nominated as ‘Best Minnesota Attraction’ by USA TODAY 10Best Readers’ Choice 2017. 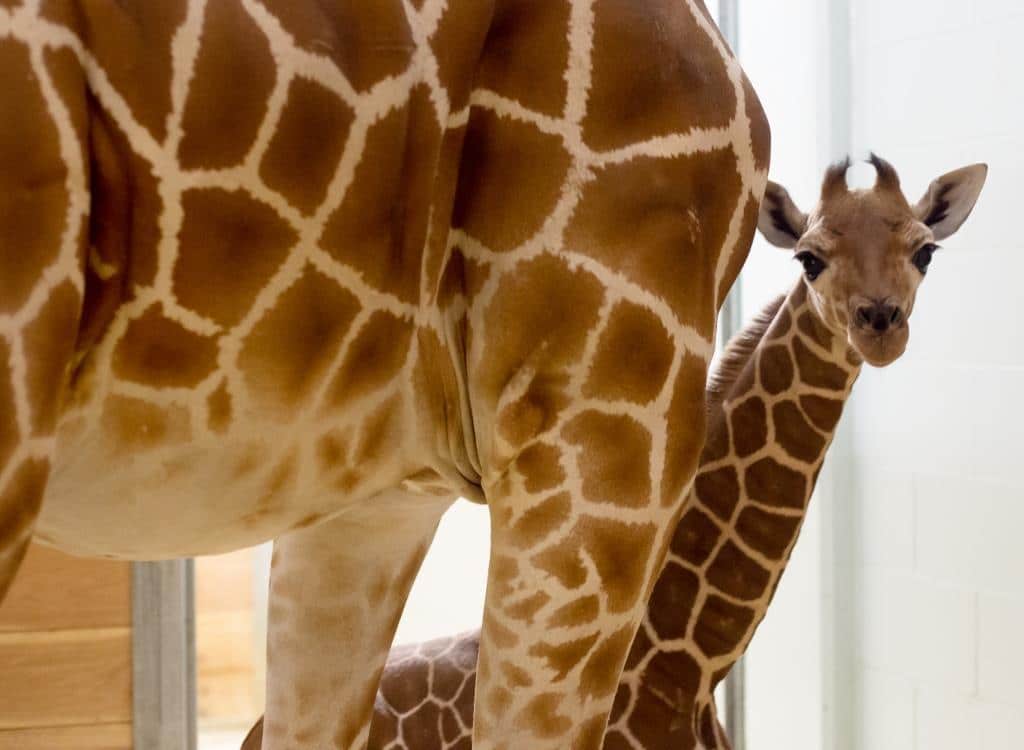 The photo of Clover giving birth to Violet was quite the social media sensation with over 6,800 “Likes” and 706 shares on Facebook.

The honor of naming the new giraffe was part of an auction at Como Friends Sunset Affair Gala. Nora McNeely Hurley, the daughter of Marjorie McNeely, was delighted and honored to name the baby giraffe.  Nora dedicated the naming to her brother Greg McNeely, who has a true passion for giraffes and served on the Como Friends board for many years. “I’d like Greg to be to be the honorary Godfather to Violet in recognition of his dedication to the Como Zoo and Marjorie McNeely Conservatory” said Hurley. “I chose the beautiful name Violet with love of a sister in honor of a brother, and in support of a place we keep close to our heart as a family.”

The giraffe is the tallest of all land-living animal species. They can be as tall as 18 feet tall and have a prehensile (used for grasping) tongue as long as 18 inches. During the first two years of a giraffe’s life, it doubles in height, often standing over 12-feet tall. Giraffe gestation lasts between 14 and 15 months, after which a single calf is born. Like human fingerprints, the markings or spots of a giraffe’s coat are unique to each individual. Reticulated giraffes are native to the dry savannahs and open woodlands of sub-Saharan Africa. 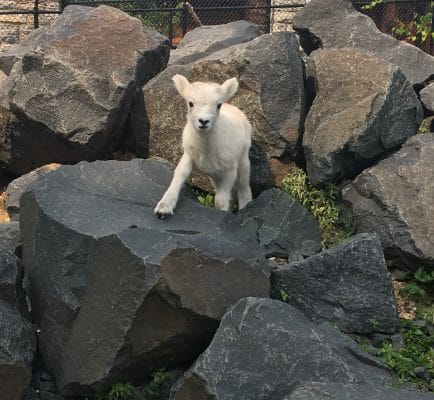 A snowy white female baby Dall’s sheep was welcomed into the world last Wednesday, August 2nd and is now prancing about in her home at Como Zoo. The yet-to-be named baby can be seen scampering around the exhibit she shares with her mother “Storm”, her father “Thunder” and her one-year-old sister, “Rainy”.

Dall’s sheep are most notable for the males’ (known as rams) massive curled horns. Females (known as ewes) also carry horns, but theirs are shorter and more slender, and only slightly curved. Until rams reach the age of 3 years, they tend to resemble the ewes quite a bit. After that, continued horn growth makes the males easily recognizable. Horns grow steadily during spring, summer, and early fall. In late fall or winter, horn growth slows and eventually ceases. This start-and-stop growth results in a pattern of rings called annuli which are spaced along the length of the horn, and can help determine age. The typical gestation period for a Dall’s sheep is 175 days and yields one baby.

Zookeepers made an exciting discovery during their rounds Tuesday morning. Lara the emperor tamarin had given birth to two babies during morning check.  The babies are clinging well but will be off exhibit for a few days so they can gain strength and bond.

This is the 5th and 6th babies born to parents Lara and Roger. The gender of the twins is not yet known and can take several weeks to determine with absolute certainty. Along with Lara and Roger, the unnamed twins join brother Luke, and brother Chewbacca (Chewy) at Como Zoo.

After birth it is a male, usually the father, who will carry the babies on his back for the first 6-7 weeks. The fathers do the majority of the care-taking, usually only handing the infants over to the mother for nursing. Siblings often help the father carry the infants.

Emperor tamarins are usually between 9-10.5 inches in body length with a tail length of around 15 inches. Adult Tamarin’s weigh about 1 pound full-grown; the twin babies weigh approximately 40 grams, about the size of a mini candy bar. Their most distinct physical feature is their long, white, drooping mustache.

And Last But Not Least, The Baby Reindeer Now Also Has A Name: Forest! 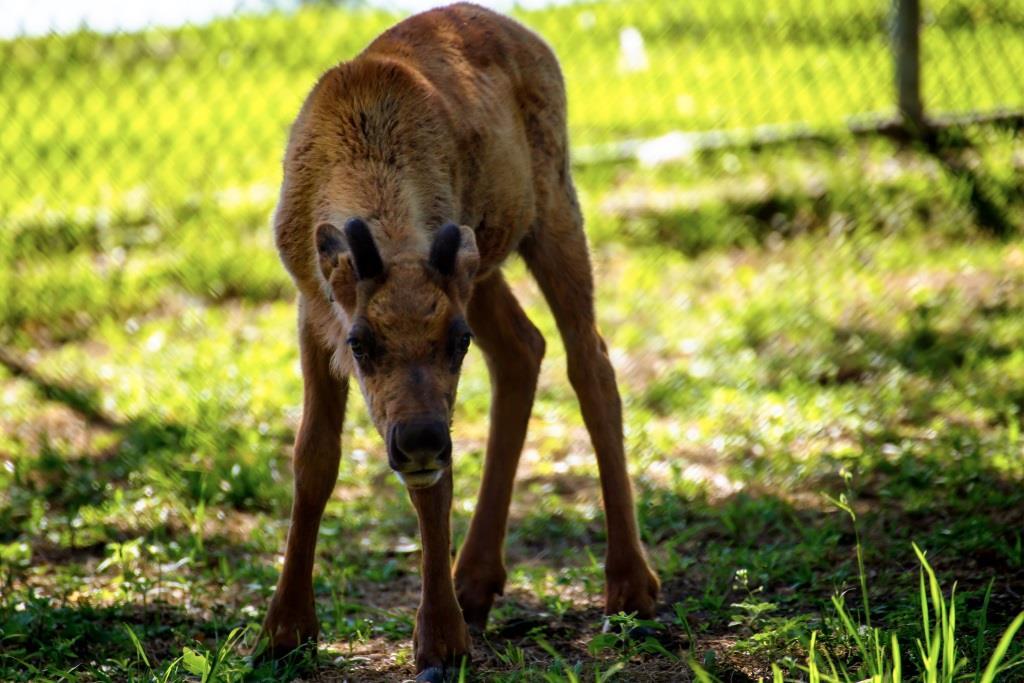 Also, the chance to name the baby reindeer was a part of the recent auction at Como Friends Sunset Affair Gala. The family that won chose “Forest” as a tribute to their Grandmother and the family home that the children and grandchildren grew up in.

Como Zoo is accredited by the Association of Zoos and Aquariums (AZA). AZA is America’s leading accrediting organization for zoos and aquariums, and accredits only those institutions that have achieved rigorous, professional standards for animal welfare and management, veterinary care, wildlife conservation and research, education, safety, staffing and more. With only 200 accredited members, AZA is building North America’s largest wildlife conservation movement and is your link to helping animals in their native habitats.

Sponsoring an animal makes a great gift – that keeps giving back. Animal sponsorships are a unique way to help Como Park Zoo and Conservatory with its wildlife conservation efforts. They support enhanced habitats and efforts to maintain the best care possible for the animals, including the primates, at Como Zoo. To purchase, visit Garden Safari Gifts at Como Park Zoo and Conservatory or call 651-487-8229.