Earlier this month, I took part in the Borneo Orangutan Survival (BOS) Foundation’s “Year of Freedom” campaign as a 2017 Como Conservation Champion grant awardee.  BOS Foundation currently cares for more than 600 orangutans between two rehabilitation centers on the Indonesian side of Borneo: Samboja Lestari in E. Kalimantan and Nyaru Menteng in C. Kalimantan.  Now that suitable land has been secured, the goal is to reintroduce 100 orangutans to protected forests, and release 100 onto pre-release islands to complete their forest training before reintroduction by the end of this year.  This will alleviate the overcrowding at the centers and fulfill their mission to rescue, rehabilitate, AND release Bornean orangutans- a critically endangered species- back to the wild.

I have been fortunate to visit and volunteer at several orangutan rescue sites on Sumatra and Borneo (including Samboja Lestari) with the support of Como Park Zoo & Conservatory and Como Friends in the past.  My focus on those trips was on the orangutans that must remain permanently in human care due to medical or behavioral reasons.  Typical projects include enclosure design and propping, enrichment, teaching husbandry workshops, and training caregivers on the use of positive reinforcement techniques when working with orangutans.  This year, I did something very different…  I was invited by BOS Foundation CEO, Dr. Jamartin Sihite, to go on a journey to release a group of rehabilitated orangutans back into the wild – a once-in-a-lifetime opportunity and dream for any orangutan zookeeper! 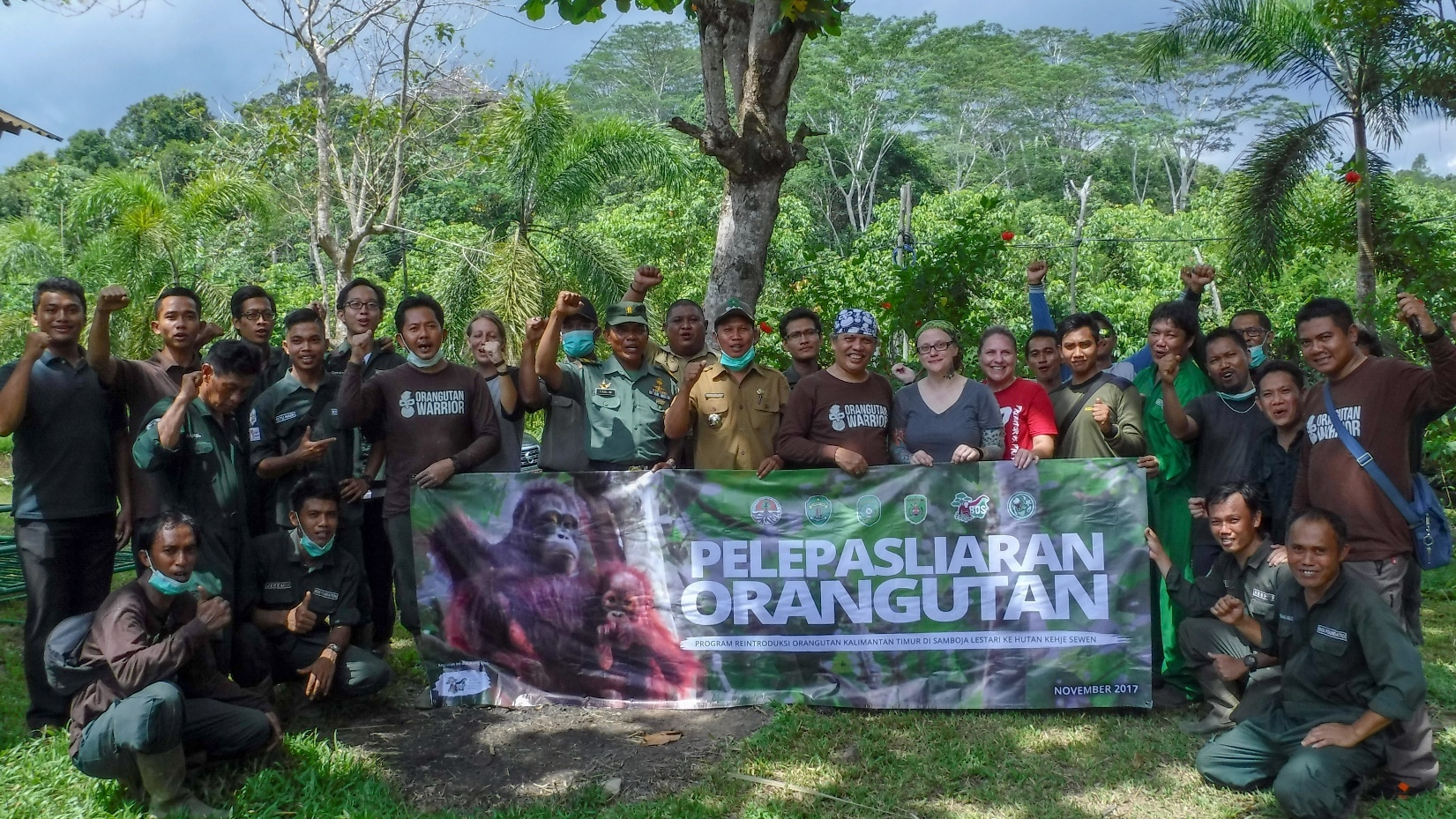 After 30 hours spent in airports and on airplanes, I arrived in Balikpapan in E. Kalimantan, Indonesia, on the island of Borneo on November 29th.  From there, it is about a 45-minute drive to BOS Foundation’s Samboja Lestari center.  I brought along Ronda Schwetz, Director of Henry Vilas Zoo.  She and I have been traveling to Southeast Asia together on an almost annual basis since 2010.  Along with serving at our zoos, she is the Field Advisor and I am the Vice Chair of the Orangutan SSP – the species management program for orangutans in AZA-accredited zoos.  I also serve as the International Orangutan Studbook Keeper.  Ronda started a keeper exchange program for rescue centers and zoos in Malaysia and Indonesia and Como has supported my assistance with this program.  We make a great team! 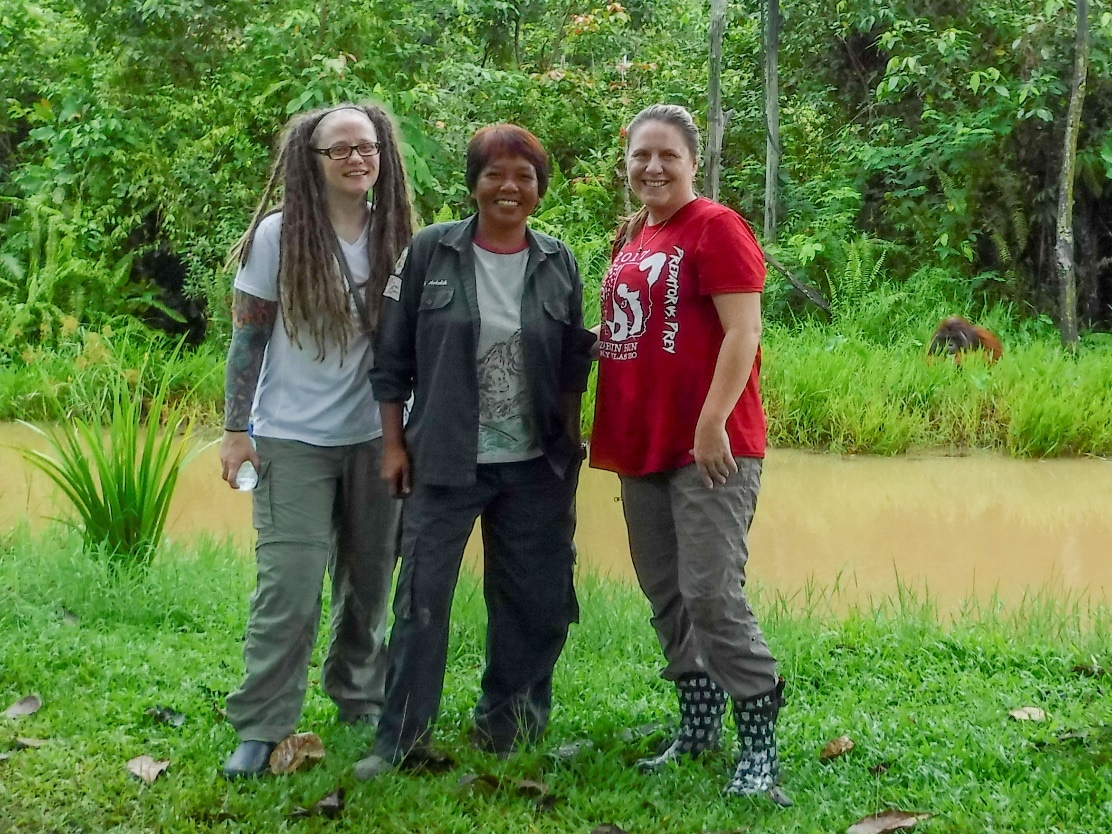 Megan and Ronda reunited with BOS Foundation Samboja Lestari staff member Wiwik Astutik… and orangutan “Romeo” (in background) both of whom we worked with in 2010.

Our first order of business was delivering over $1200 worth of medical donations to the veterinary clinic at Samboja Lestari.  Items included stethoscopes, pulse oximeters, formulary references, surgical supplies, and some apparel from our zoos. 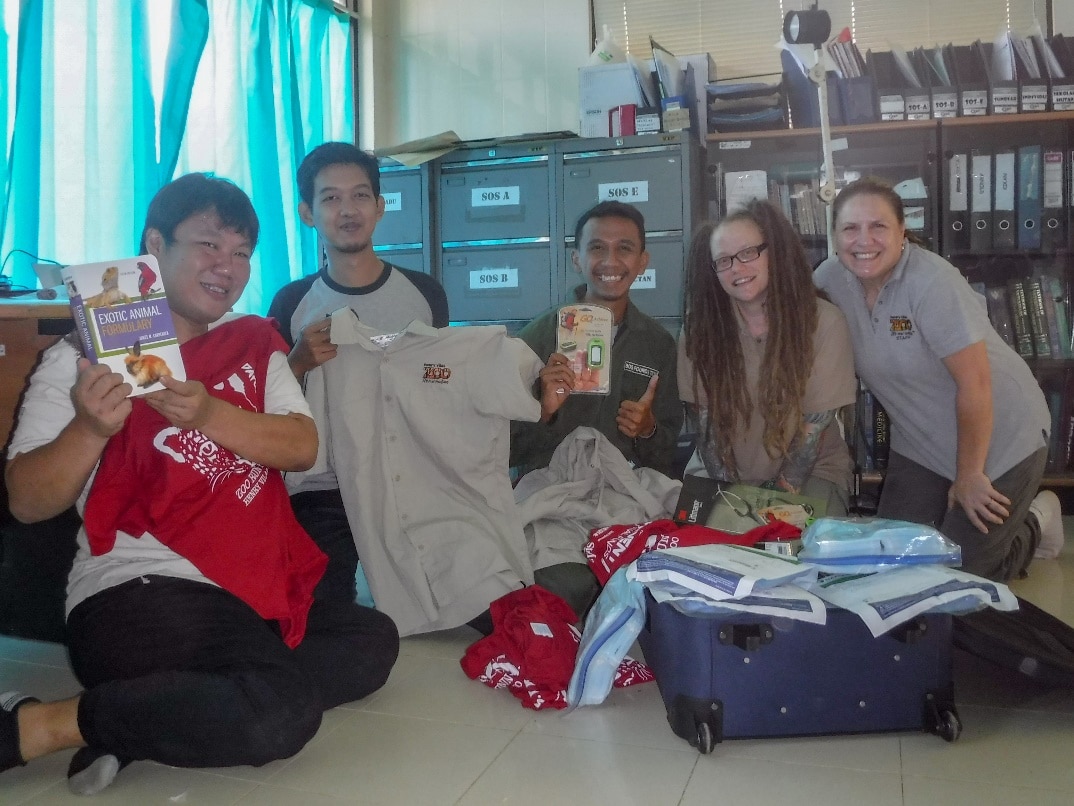 We underwent a quarantine period at Samboja Lestari to ensure that we were healthy and not at risk of transmitting any illnesses to the orangutans being released.  BOS Foundation also ensured that we were fully vaccinated and tested negative for tuberculosis since orangutans can catch any diseases that humans carry.  This is something that we are always aware of at Como when working with primates – especially great apes during cold and flu season.  We spent our days of quarantine touring the new man-made islands, Special Care Unit, and observed the immobilizations and transfers of three orangutans (one of which had been in a cage for 20+ years and that we met during our 2010 trip) to one of the onsite man-made islands. We also created and delivered enrichment to some of the ~150 residents cared for at the center. 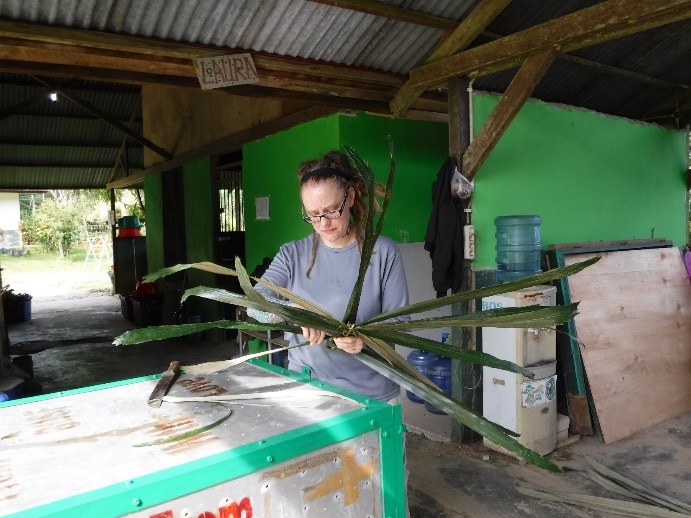 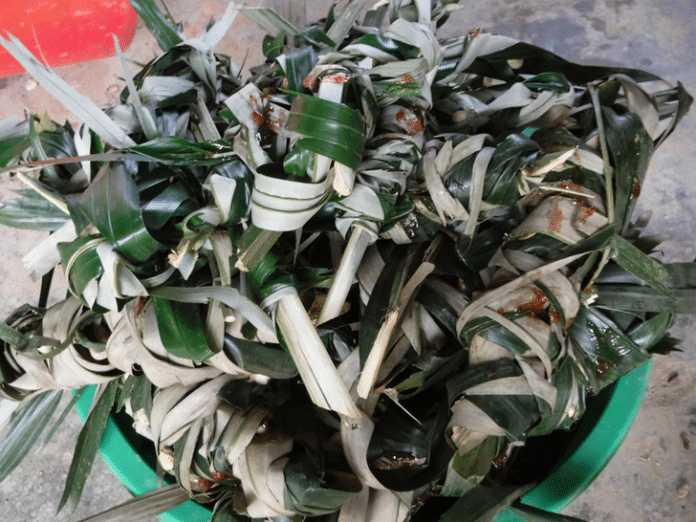 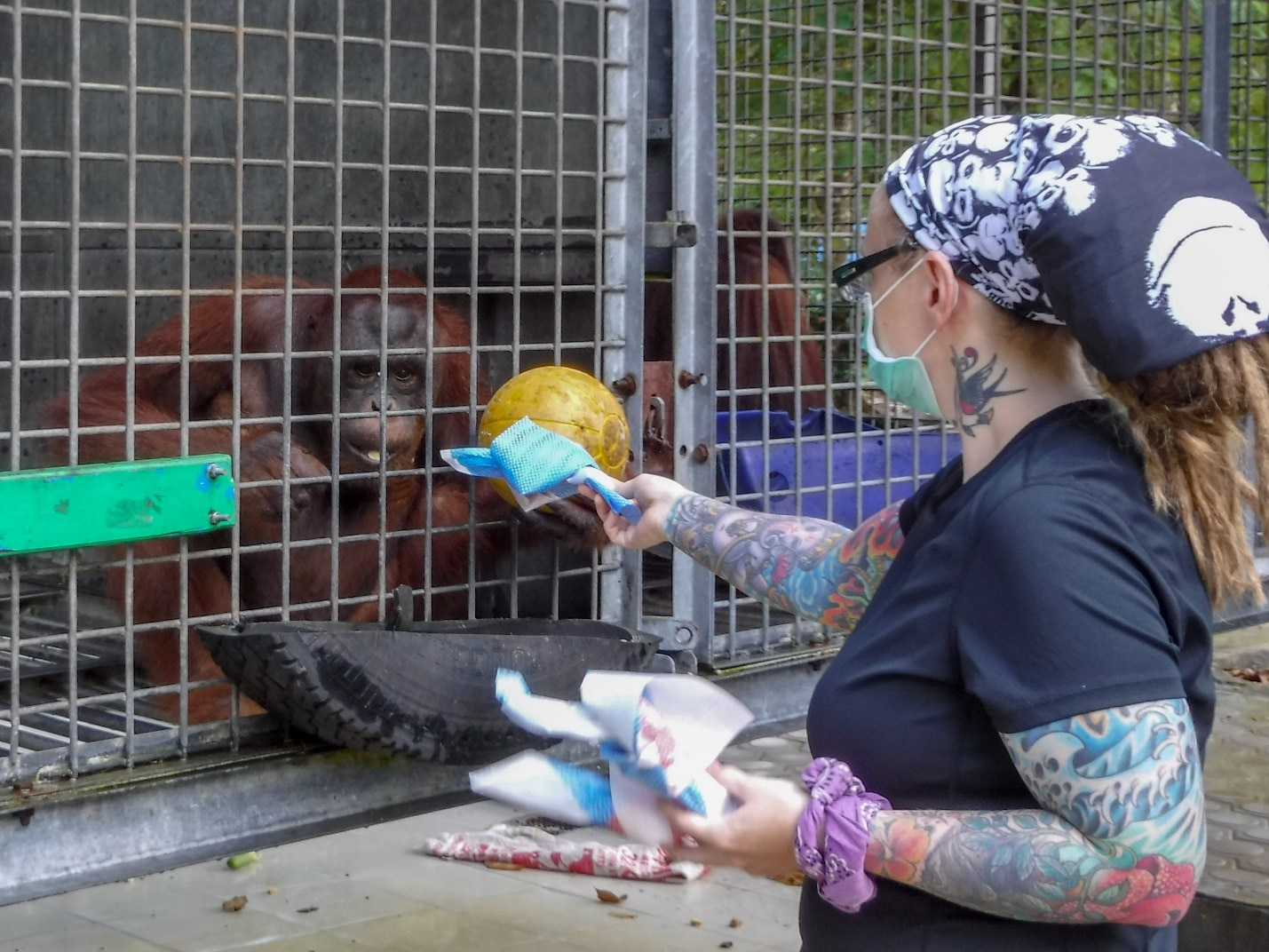 We also had the opportunity to observe “Forest School” training for various age groups.  Orangutans stay with their mothers for up to 10 years.  She teaches them everything they need to know to survive in the wild.  Orphan orangutans are taught these life skills by human “baby sitters” at the center.  These skills include nest building, searching for edible fruits and plants, as well as identifying potential predators. 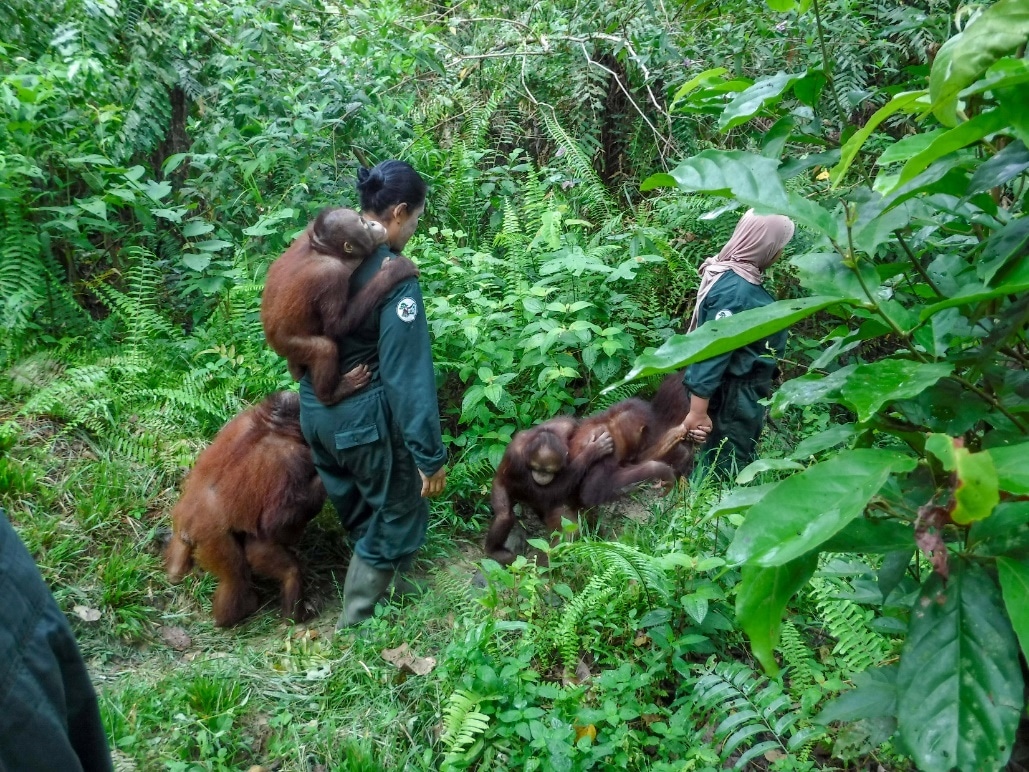 Orphans leaving their night cages to spend their days in the forest. 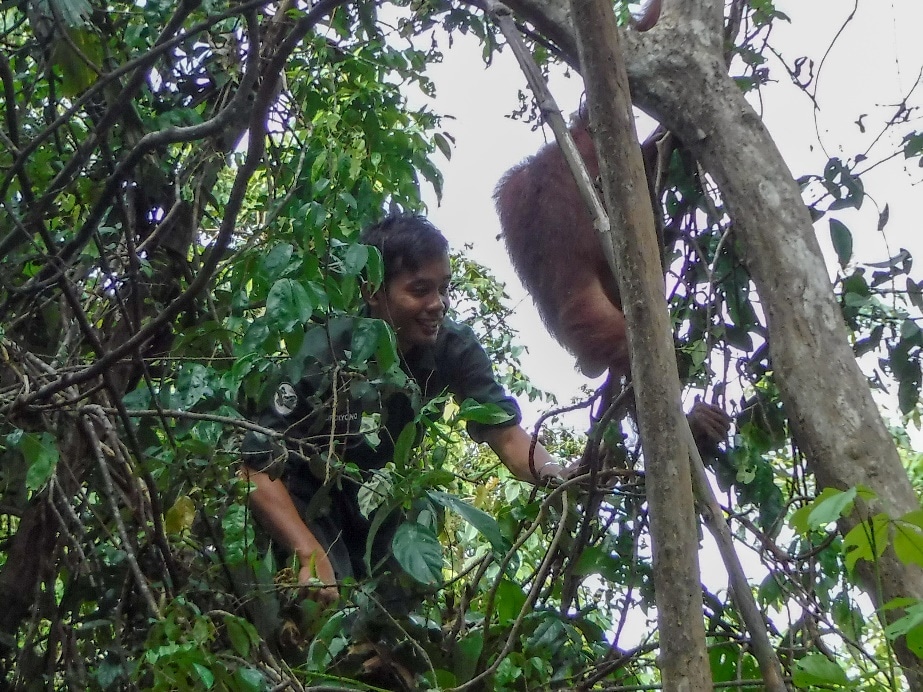 Nest Building 101 as taught by a caregiver.

Then on December 4th, we departed for the release trip.  Following a ceremony with local officials, we traveled to the capitol of E. Kalimantan, Samarinda, for a second ceremony with wildlife officials, witnessing the signed authorization for the release of the five orangutans and participating in a media event.  Then we set off for the 20-hour journey to Kehje Sewen- an 86,000-hectare protected rainforest that is home to 80 rehabilitated BOS Foundation orangutans. 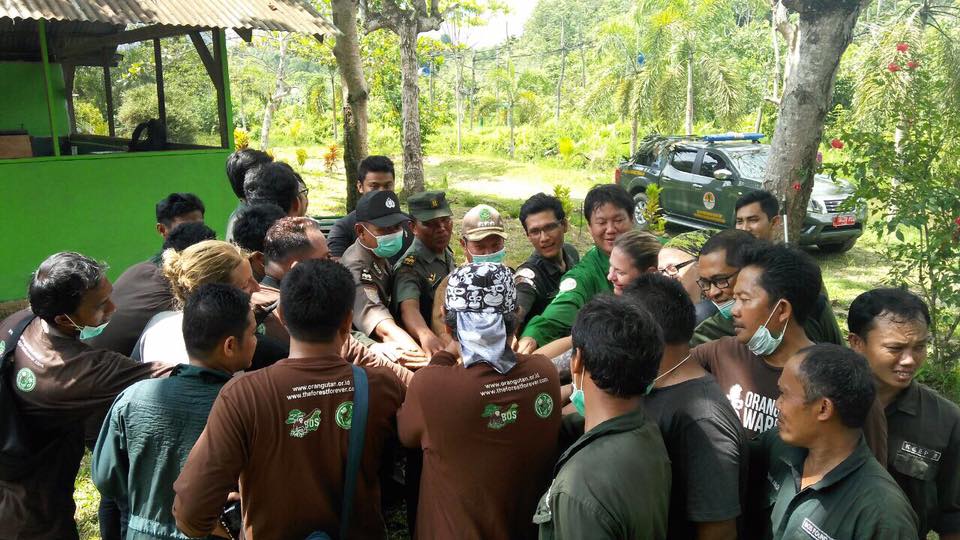 Team cheer before heading out. 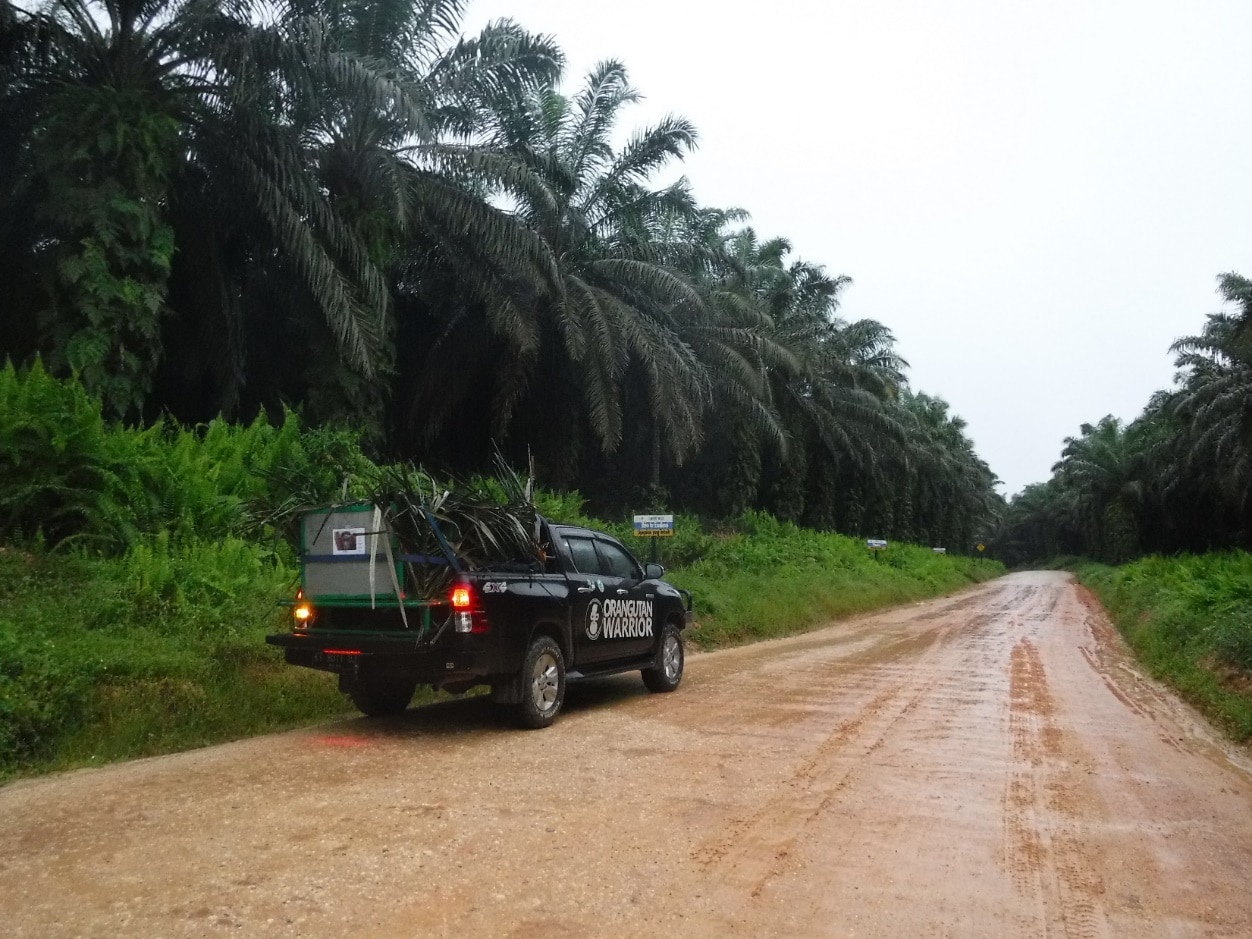 Driving through palm oil plantations to reach the release site. The cutting down of forests for timber and conversion of land to palm oil plantations is one of the biggest threats to orangutans as they lose their habitat. Coal and gold mining along with poaching, also threatens their existence Go to http://bit.ly/2zNa8ls to learn more about the situation and what you can do as a shopper. 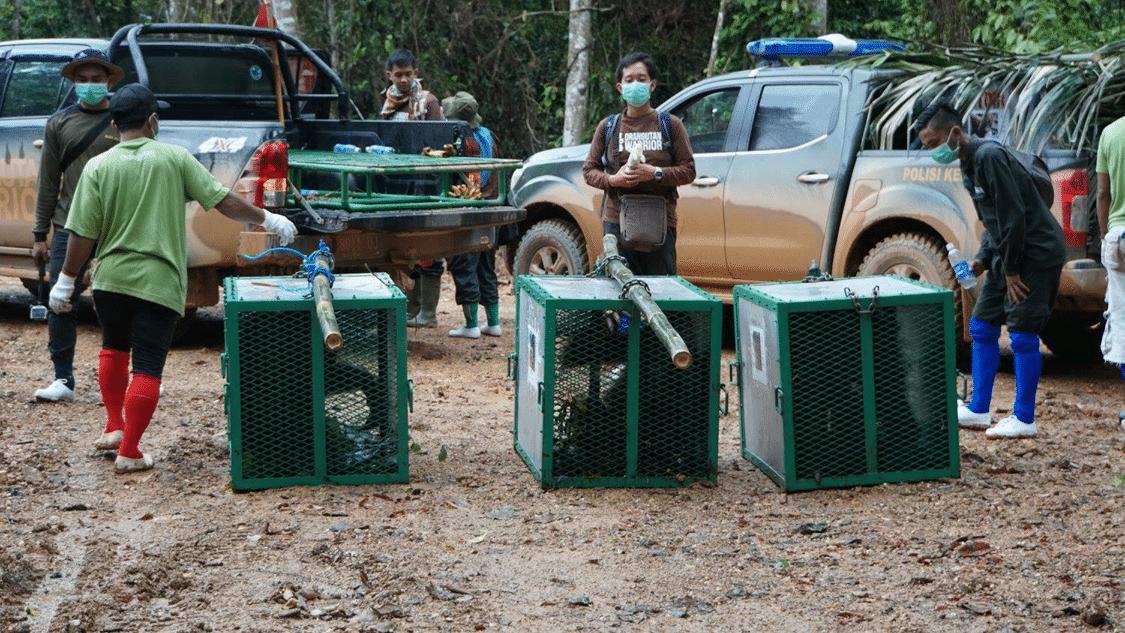 Unloading where the road ends…. 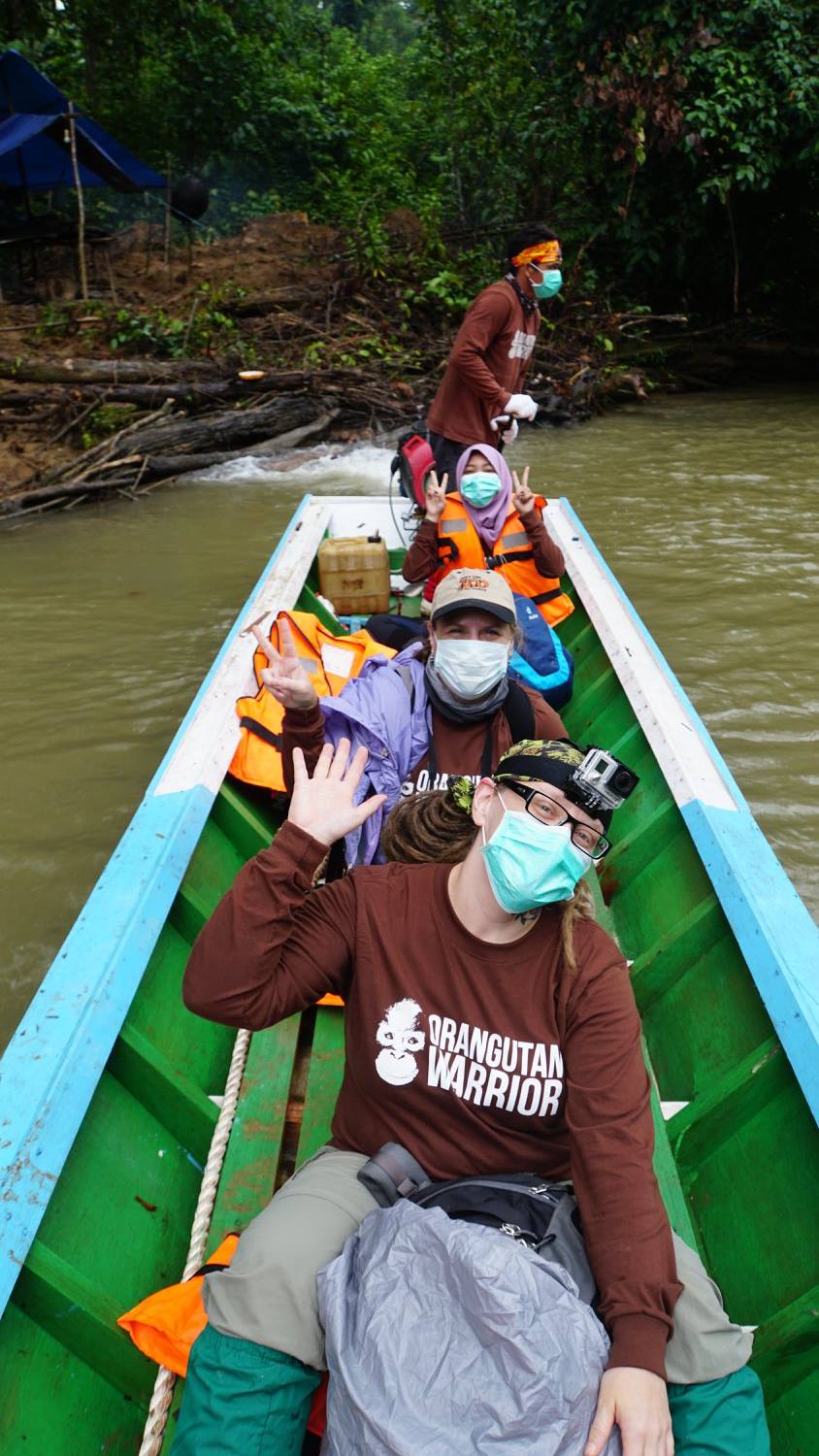 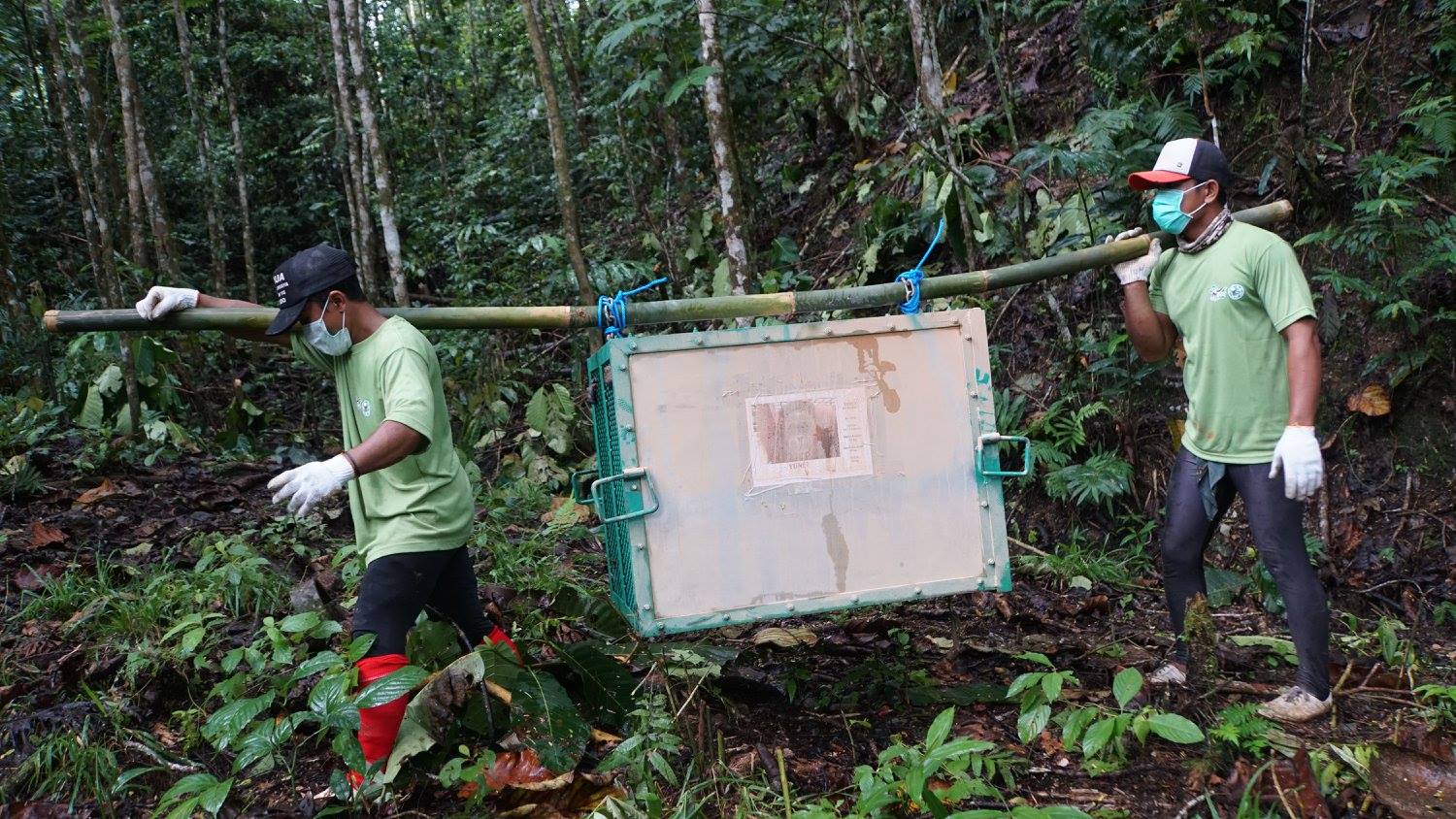 …. and carrying the crates through dense, leech-infested rainforest.

We released five orangutans on this trip.  I was given the honor of opening the first crate containing 7-year-old “Santa” who was found near a village at the age of 3 with no sign of a mother.  She was too young to survive on her own at that age and was taken in by BOS Foundation for release later when she was at an appropriate age and level of training.   Here is her story as well as the others: http://bit.ly/2k7N9iW 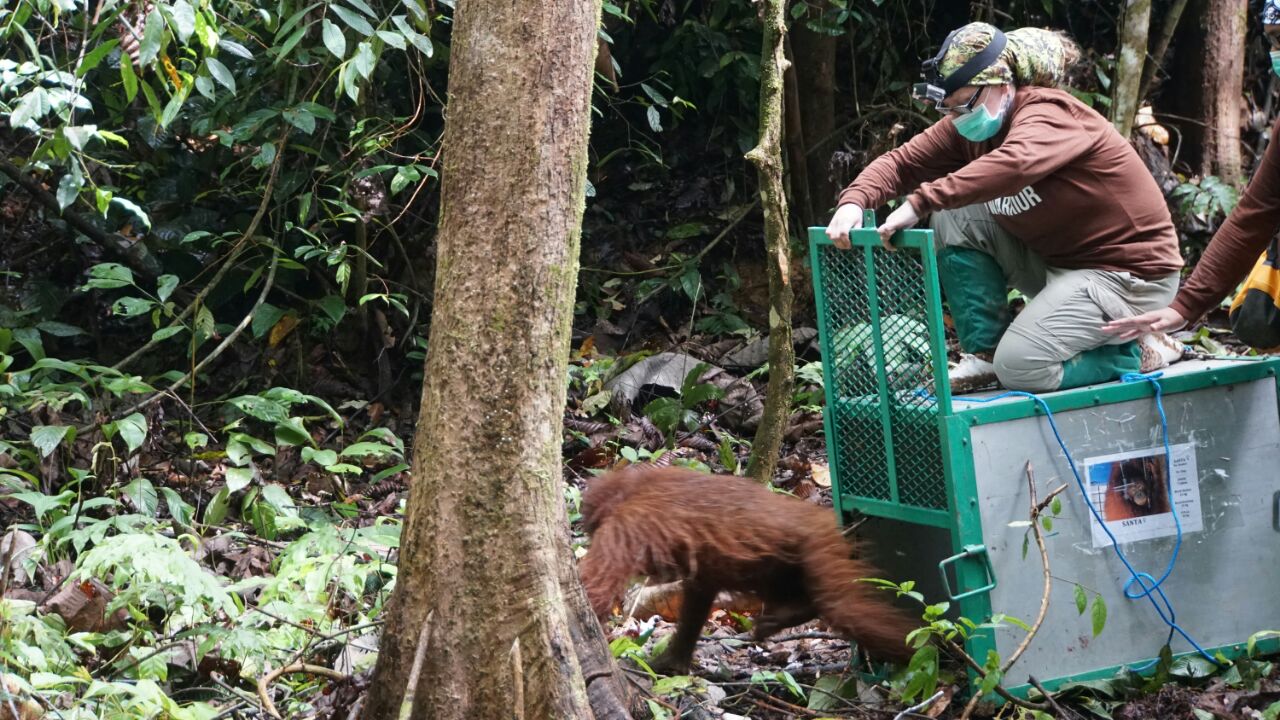 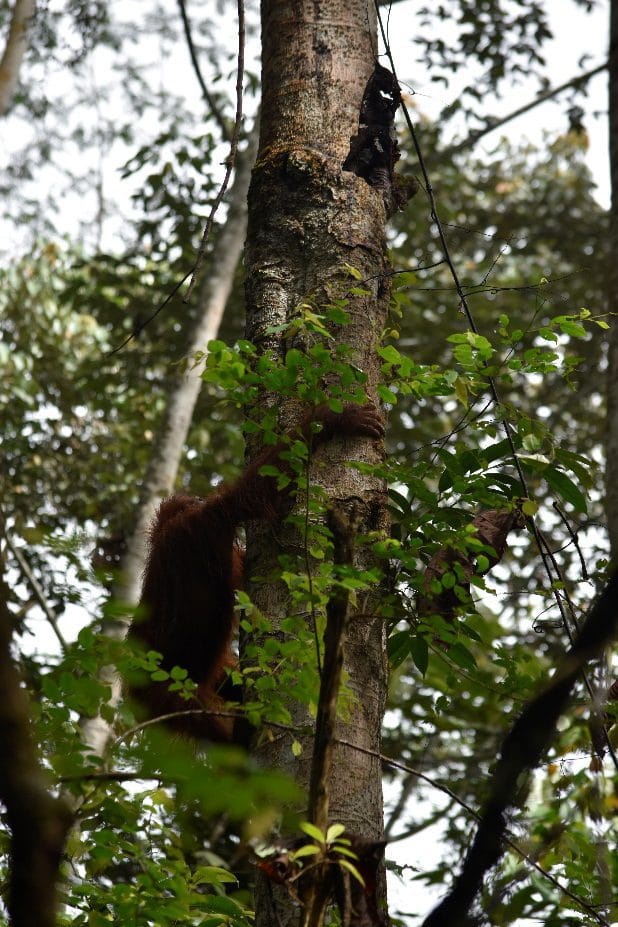 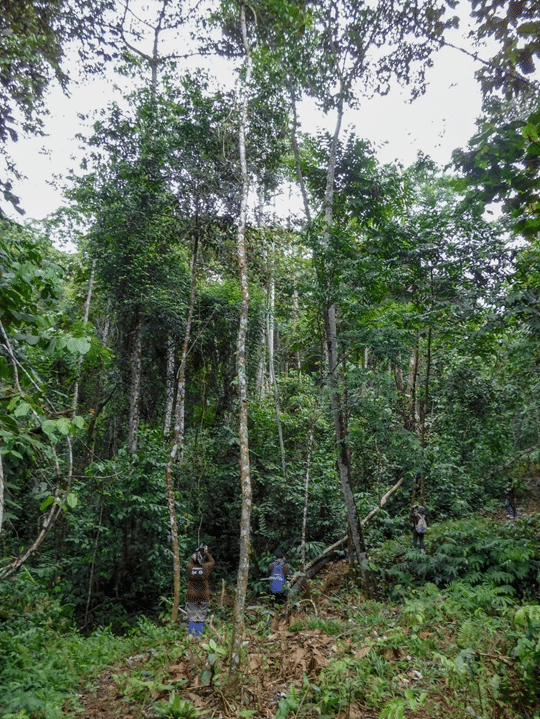 I spent time with the release monitoring team collecting data on her first day of freedom.  Santa was observed finding food in the forest and nest building that very day.  She will be monitored closely for the first 30 days and then less intensively for two years.  BOS Foundation has a high success rate and it was an honor to support and be a part of this amazing program.  To learn more about BOS Foundation, go to: http://bit.ly/2bmLOi9

Arriving home, I always look forward to returning to the five orangutans that I care for at Como Zoo (three of whom I’ve cared for 15 years) and sharing my experiences with our zoo visitors and donors.  Thank you, Como Friends! – Zookeeper Megan 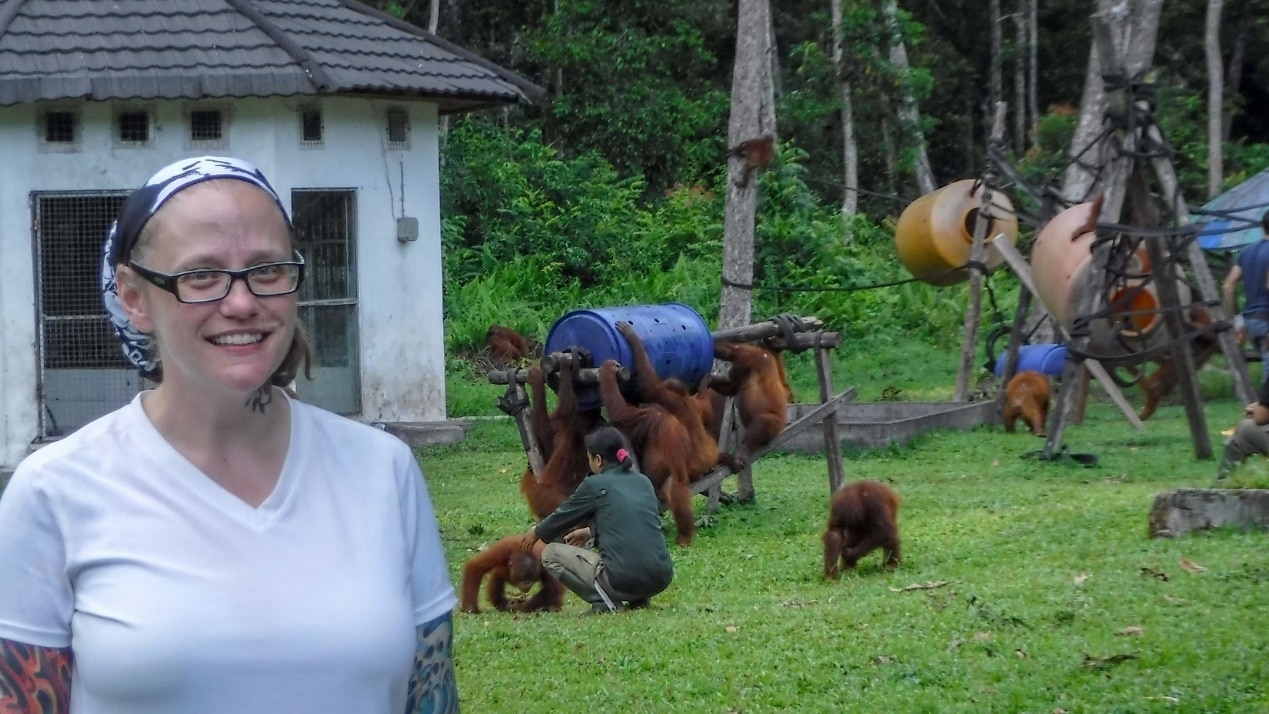 Visiting and assisting with enrichment at Nyaru Menteng (made famous on Animal Planet’s “Orangutan Island”).