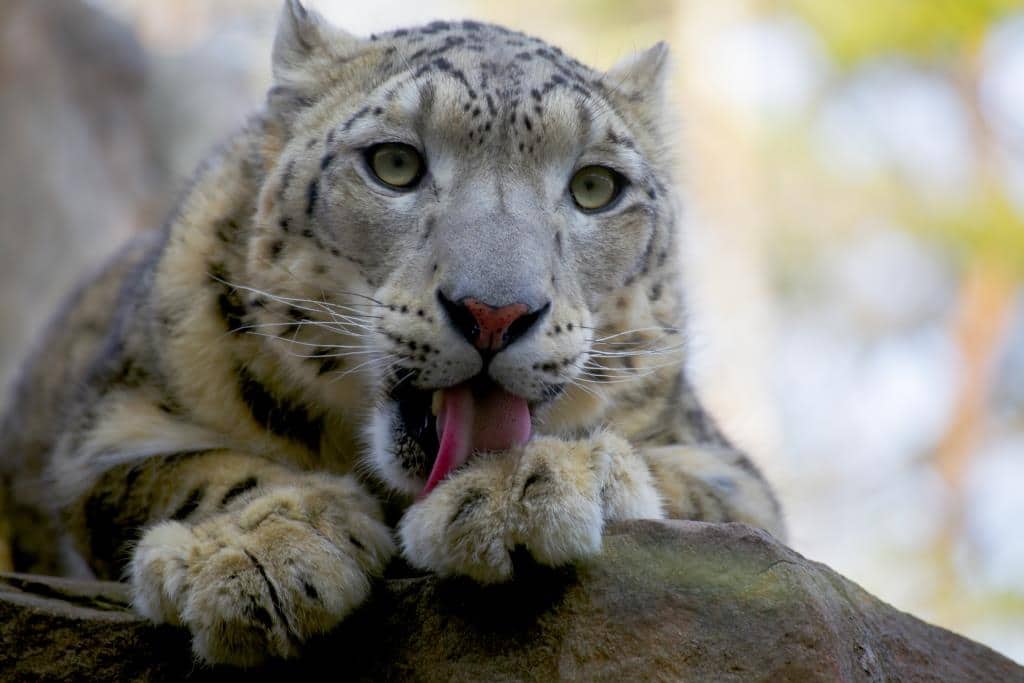 Como Zoo is thrilled to welcome two young European-born snow leopards; Moutig, a male recently imported from France and Alya, a female from Berlin, Germany. Moutig, the three-year-old male, made his public debut in early March, leaping around the rock formations and vocalizing at the lions he can see from his habitat. His partner, Alya, born May 2014, is expected to make the move outdoors later this spring, and if nature takes its course, the pair could have kits as early as 2018. “What’s going to be fun about this particular pair of cats is that they’re so young and playful,” says Como Zoo senior keeper and animal registrar Jo Kelly. “Moutig especially is a very curious cat–visitors are going to love watching him leap.”

With genetic lines not well represented outside of Europe, the pair were part of a trio of young snow leopards selected for placement in North America through a rigorous selection process that attracted applications from zoos around the country. Como Zoo was eventually chosen to receive the breeding pair, while a third snow leopard went to the Milwaukee Zoo. Minnesota’s cold climate played a part in the selection, but so did Como Zoo’s 60-year history raising and breeding these endangered cats. “We’ve had snow leopards at Como as far back as 1957, with twelve births, and a lot of success getting large cats to participate in their own health care,” Kelly says about Como’s operant conditioning training program. “Our cats will open their mouths and present their hips for voluntary vaccinations–the sorts of behaviors you could never train your house cat to participate in.”

Their trans-Atlantic travel plan required nearly 10 hours of air travel and countless hours of coordination with zookeepers in Germany, France and St. Paul across language barriers. “This was really a three-year process, with so much paperwork and so many details to work out in multiple languages, that it’s remarkable that it all went so well,” says Kelly. “Thank goodness for Google Translate.”

Snow leopards range across two million square miles of wild habitat and twelve countries, but very few human beings will ever encounter one face to face. Reclusive and crepuscular, these magnificent cats live in the shadows of mountain ranges from Afghanistan to China to Mongolia, making it a challenge for researchers to know just how many of these endangered cats still survive in the wild. Current estimates from the Snow Leopard Trust suggest that there may be as few as 3,900 wild snow leopards left in the world.

Sponsor the snow leopards! Sponsoring an animal makes a great gift – that keeps giving back. Animal sponsorships are a unique way to help Como Park Zoo and Conservatory with its wildlife conservation efforts. They support enhanced habitats and efforts to maintain the best care possible for the animals, including the snow leopards, at Como Zoo. To purchase, visit Garden Safari Gifts at Como Park Zoo and Conservatory, call 651-487-8229 or go online to comofriends.org.