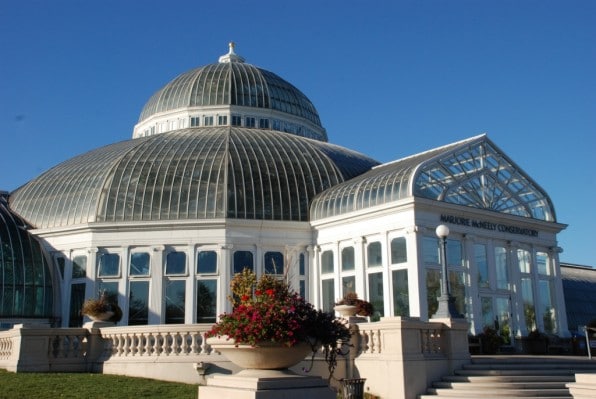 Flowers Will Be Given to First 95 Visitors On November 7!

The Marjorie McNeely Conservatory is the centerpiece of Como Park. Designed and built in 1915, the conservatory was intended to serve two functions, as it still does today. The conservatory is both a show house where visitors can come in all seasons to enjoy tropical & semi-tropical splendors, and a shelter for the many plants the park displays in its indoor and outdoor gardens.

Listed on the National Register of Historic Sites in 1974, the conservatory has survived over the years through the efforts of devoted volunteers and donors who recognize it as an endangered species. In 1999 it became the 3rd botanical garden in the United States to receive the HortLandmark Award from the American Society for Horticultural Science. With a large contribution from the Donald McNeely family in 2002, it was renamed the Marjorie McNeely Conservatory at Como Park in memory of plant lover Marjorie McNeely. The work continues both on and in the building whose future shines brighter than ever.

History of the Marjorie McNeely Conservatory has been chronicled in the 2009 Afton Press book, “Jewel of Como”, which is available at local bookstores and Garden Safari Gifts in Como Park Zoo & Conservatory’s Visitor’s Center