Reacquaint Yourself with a Distant Cousin at Como

Orangutans are considered one of the closest living relatives to humans, sharing 97 percent of the same DNA, yet experts predict wild orangutans could become extinct as natural populations in ten to twenty years. On November 13 & 14, find out how to help these magnificent animals during Como Park Zoo & Conservatory’s Orangutan Awareness Weekend.

Learn about these amazing creatures first hand with a weekend full of special activities. There will be special orangutan training demonstrations, orangutan zoo keeper talks, banana gardener talks, puppet shows, crafts, and games.  Kids can see how they measure up to an orangutan by comparing their arm span against a 7 foot orangutan cut out.

Daily at 10:00am the orangutans will participate in a special enrichment activity.  Enrichment activities enhance zoo environments for animals, stimulating them to investigate and interact with their surroundings. Como Zoo enriches animal environments by making changes to structures in their enclosures, presenting novel objects and smells for them to investigate and explore, and by changing how we present food to them. It encourages them to forage, hunt and handle their food in ways that are natural to them in the wild.

Recycle your cell!  Como has set up a permanent collection point to collect and recycle unwanted cell phones. All cell phones collected will be sent to Eco-Cell and Como will received funds for each phone donated.  The funds raised will go to orangutan conservation projects that help preserve one of the most critically endangered species on earth, the orangutan.

Historically, orangutans were found throughout Southeast Asia and even as far north as China. But today with the rapid decline of their rainforest homes, orangutans live only on the islands of Borneo and Sumatra. It is estimated that suitable orangutan habitat in Malaysia and Sumatra has declined by more than 80 percent in the last two decades, and the wild population of Sumatran orangutans has dropped by nearly half.

According to a report released by the United Nations Environment Programme in February 2007, the spread of palm oil plantations and illegal logging to the national parks in Indonesia constitutes a conservation emergency for the critically endangered orangutan. Palm oil is becoming increasingly popular as an alternative to trans fats, and is found in one of 10 supermarket products, including margarine, baked goods, sweets, detergents and lipsticks. There is also an increasing market for vegetable oil as a renewable fuel (biofuel), in response to the need to reduce global carbon dioxide emissions, and palm oil is currently considered the most productive source of biodiesel fuel. Organizations like the United Nations Environment Programme and the Indonesian government are working to find economically and environmentally responsible solutions. 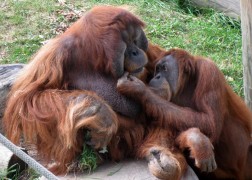