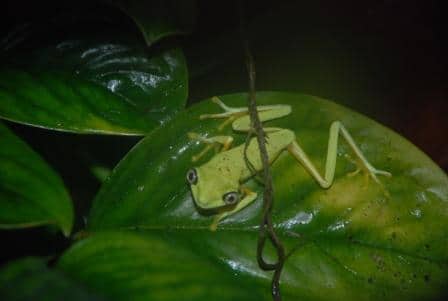 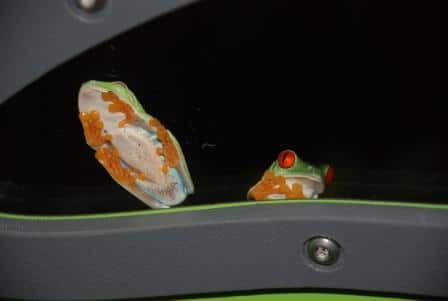 Como Park Zoo & Conservatory is leaping with anticipation to unveil “RibbitZibit”, a new frog conservation exhibit which incorporates living animals & plants inside the Leonard Wilkening Children’s Gallery.  Guests can get eye-to-eye with Red-eyed Tree Frogs, leer at the Lemur Tree Frogs, and peer into the Panamanian Golden Frogs habitat. The Poison Dart Frogs are well represented in colors of yellow & black, blue & black, and green & black. There is also a separate window to watch the world of tadpoles as they begin their transformation. With several large, eye-catching interpretive displays within the exhibit, visitors can read interesting facts about each species and learn about the global crisis in amphibian survival.

The exhibit will not only showcase these unique, colorful amphibians, but also teach and inspire guests about one of the greatest and most urgent conservation undertakings ever; the preservation of frogs and amphibians. Why do frogs matter? What most people do not recognize is that frogs are an important part of a healthy environment. They control pest insect populations that damage agriculture and spread diseases. These amazing creatures are sentinel animals and are among the first species to be impacted by contaminants in the environment. Some frog species have been used with great success in the advancements of medicine to help heal the sick.

Experts say nearly half of all the world’s more than 6,000 species of amphibians are threatened with extinction due to habitat loss, climate change, pollution and pesticides, introduced species, wild animal collection and most urgently, a parasitic fungus called amphibian chytrid, a deadly disease that is rapidly eradicating amphibian species throughout the planet. This represents the greatest species conservation challenge in our history.

Como’s mission is to inspire the public to value the presence of living things in our lives, and a main value is educating on conservation. The frogs and conservation efforts that will be highlighted include:

Panamanian Golden Frog – Due to the global amphibian crisis, Como staff is participating in the management and husbandry of five species of frogs endemic to the Central American country of Panama as part of the Chytrid Fungus Recover Plan. Zookeepers at Como Zoo have successfully bred Panamanian Golden Frogs, Lemur Tree Frogs and Glass Frogs. Some of the resulting offspring have been donated to other AZA institutions.

Poison Dart Frogs – Poison dart frogs, also called poison arrow frogs, are so named because some Amerindian tribes have used their secretions to poison their darts. These frogs are found in Colombia along the western slopes of the Andes. In 1999 a Zoo pathologist published his discovery of a then-mysterious infection that was afflicting and eventually killing poison arrow frogs and white’s tree frogs. Through his effort, cutaneous chytridiomycosis was documented for the first time as a vertebrate parasite. The veterinarians along with keepers and pathologists also developed a treatment for the chytrids. Como Zoo has been working on conservation and breeding programs for the Poison Dart Frog, along with the treatment of this parasite.

Tropical Tree Frog – Due to habitat loss, these small creatures are running the risk of becoming extinct. These animals are the most important part of our ecosystem. For example, they consume large quantities of insects and other prey, and in turn they are consumed by other animals, in endless food webs of rainforests. Just because they are such vital chains in the ecosystems they belong to, and due to their overall sensitivity, frogs are considered an indicator species – the species that can act show environmental change or the change in an ecosystem’s health. The “indication” for us humans to note here is that such environmental change affecting the tropical frogs can also affect many other species of animals including ourselves.

Funding for the new RibbitZibit was provided through the Minnesota Legacy Amendment’s Arts and Cultural Heritage Fund.