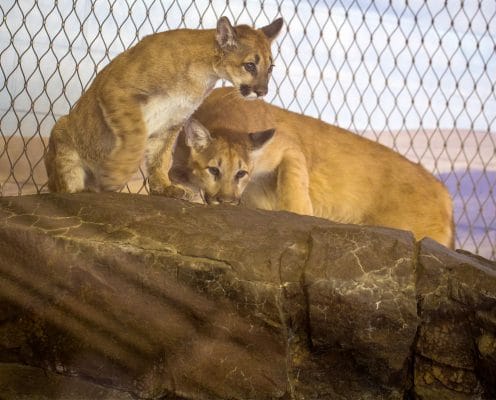 The pumas arrived from California to Como on October 30th after being cared for by Oakland Zoo wildlife specialists.

Como Zookeepers and University of Minnesota Veterinary staff are monitoring and tending to the cubs, a male and a female, who are approximately 8-12 weeks old.

“Although it is heartbreaking circumstances that brought us these beautiful cats, we are happy to be able to provide a home, the care, and support that these animals will need to thrive as individuals and as a species”, said Michelle Furrer, Director of Como Park Zoo & Conservatory.

The male cub was orphaned after its mother, which was reportedly killing sheep, was shot and killed under a legal depredation permit. In the state of California, a person who suffers property damage by mountain lions is entitled to obtain a depredation permit to protect their property.

The second cub, a female, was discovered after a property owner heard ‘chirps’ from what he believed to be a bird over a period of seven days. Puma cubs make a high-pitched ‘chirping’ sound when calling for their mother. The property owner reported the cub to the California Department of Fish and Wildlife. The cub was severely dehydrated, emaciated, covered in parasites and burrs.

“While we don’t know for sure what caused this female cub to become orphaned, we do know that one of the biggest threats to mountain lions in California is traffic, with 107 animals killed by automobiles in 2016 alone,” said Amy Gotliffe, director of conservation at Oakland Zoo.

In 10 months, five unrelated orphaned puma cubs have been rescued and brought to the Oakland Zoo by the California Department of Fish and Wildlife.

“We are so pleased that Como Zoo is able to play a role in saving the life of these cubs,” said Nicole Carion, California Department of Fish and Wildlife’s Rehabilitation Coordinator. “Returning injured or orphaned wildlife to the wild is always the ideal outcome, but in situations like this — where an animal is too young to have the necessary survival skills — placing it back in the wild would be a death sentence. In those cases, we rely on AZA-accredited zoos with experienced wildlife specialists and resources to step in and provide critical care.”

Como Friends Board leadership, who are stepping down after many years of volunteering their time and talents, were given the opportunity to name the cubs. “Ruby” (female) symbolizes the red gemstone and a precious jewel and “Jasper” (male) represents a variety of quartz and a symbol of strength and treasure.

This YouTube video was produced by the Oakland Zoo: https://www.youtube.com/watch?v=0yDPgn3n9ac