Zookeeper Jill in South Africa with the Balule Conservation Project

As a Conservation Champion, I spent two weeks volunteering with the Balule Conservation Project in South Africa. The Balule Conservation Project  is a conservation management project based in the wilderness of  the Balule Nature reserve in Greater Kruger National Park. The experience was awe inspiring!! I was able to see the wild counterparts of the animals I am lucky to work with as a zookeeper. During my time spent in the bush camp, at least ten rhino were poached in close vicinity of the reserve. The news is heartbreaking and there is little end in sight with the current political climate in South Africa. The volunteers, staff of the Balule Conservation Project and the Black Mambas (the world’s first all-female anti-poaching unit) are an inspiration to those of us who want to change the way the world sees animals and save endangered species. I am so grateful to Como Friends and the Como Park Zoo and Conservatory for supporting my travel and funding the project to let me do a small part in the larger fight for conservation. If you liked to know more, please find me in the giraffe barn hanging with the tall blondes. Enjoy!

Today, I arrived at the Olifants West Gate of the Balule Nature Reserve!! After a quick introduction to the team, we headed straight into the field to hunt and destroy alien vegetation also known as invasive cacti species. Lodges and landowners in the reserve planted ornamental cactus in the past which have spread throughout the reserve, damaging the ecosystem and posing a threat to the native plant species. We recorded the GPS coordinates and method of destruction (biological or chemical) used for the plants we found and later entered the information in a database. The team will use the information to monitor the plants in the future and make sure the spread is stopped. 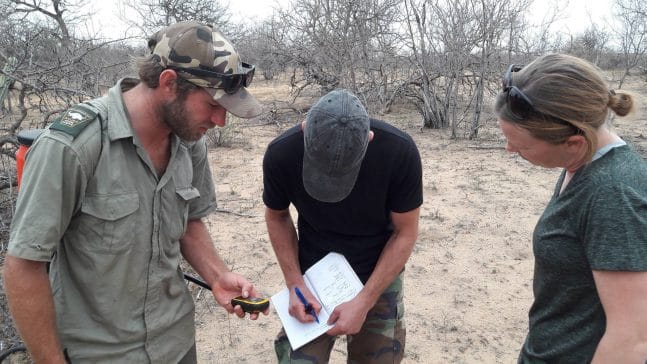 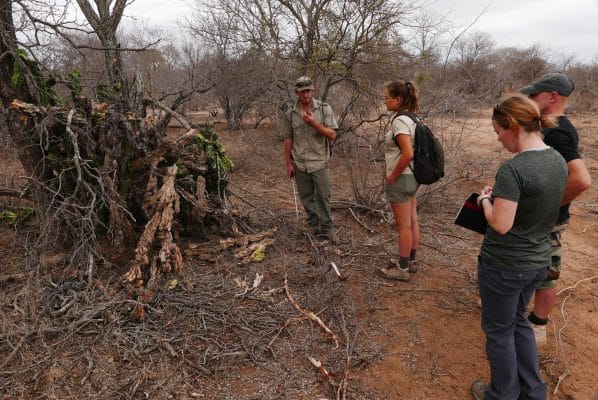 Field technician Warren and I traveled to Nourish, a local nonprofit organization, who has partnered with Balule Conservation Project by donating hundreds of tree saplings. The tree saplings will be donated to the Bush Baby education program in the community and to the lodges in the reserve when the elephants knock over mature trees. We transported, replanted and watered the saplings from Nourish to the small nursey within Balule. 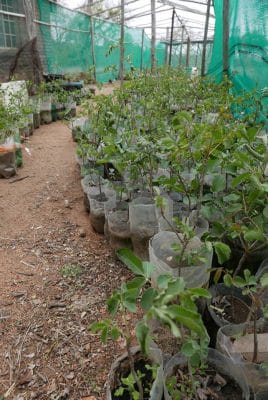 The morning was spent fixing the fence line which had previously been damaged by elephants. The fence line is very important to the anti-poaching team. It is the first line of defense if a poacher enters the reserve and the last line of defense to keep the animals away from the highway. The fence is electrified and has a number of sensors which send an alert to the monitoring system if disturbed. The Black Mambas, the unarmed anti-poaching unit utilize the fence data, informant information and foot patrols to monitor Balule. They are a mostly women ranger group who have been highly successful protecting the area rhino from poachers. 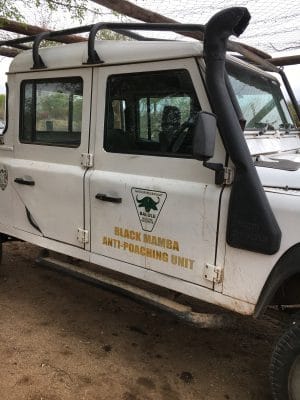 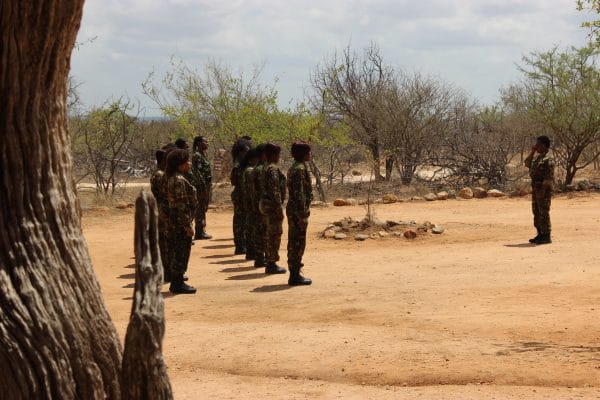 Sundays are reserved for cleanup and data entry. The volunteers and staff spent the day cleaning the camp, pumping water, preparing for the week and doing a little bit of relaxing. 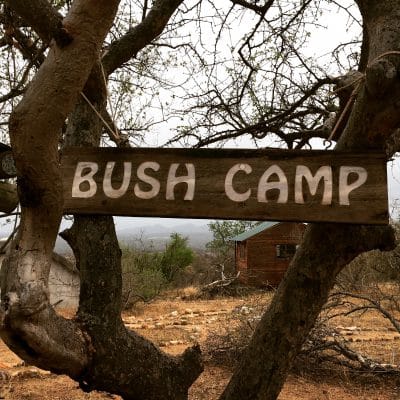 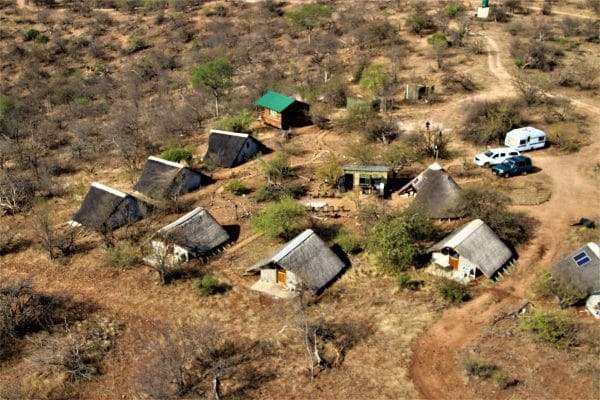 I was lucky to spend two days off on a trip to Kruger National Park with Warren, the awesome camp field technician and fantastic guide. We drove during day light hours for two days and saw tons of animals. I saw my first wild rhino, lots of giraffe and hundreds of elephant. I saw giraffe and zebra hanging out together in the bush and even saw a giraffe taking a nap with her head on her rump – something we didn’t know they did until very recently. 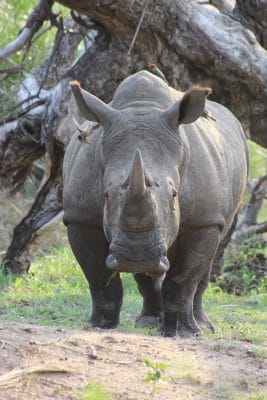 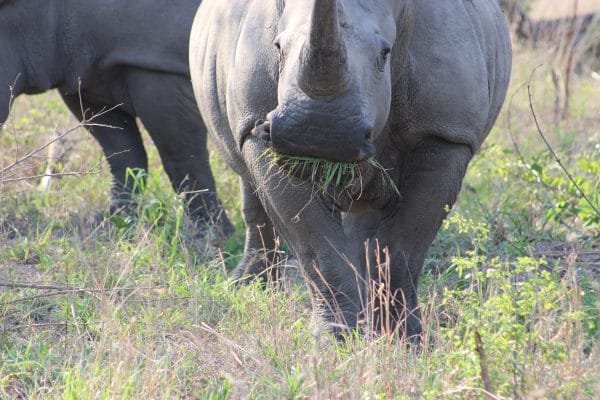 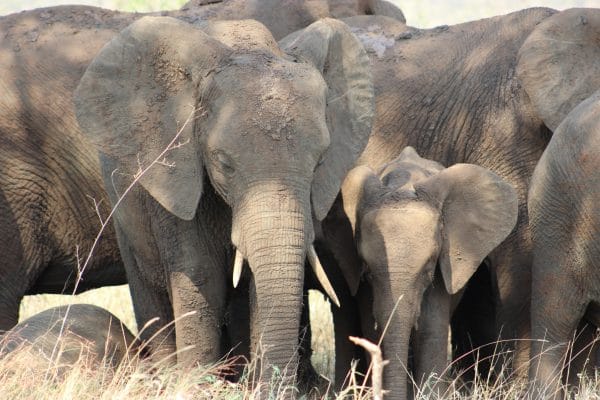 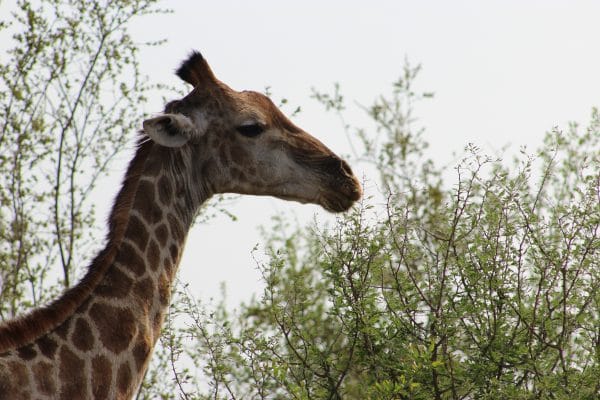 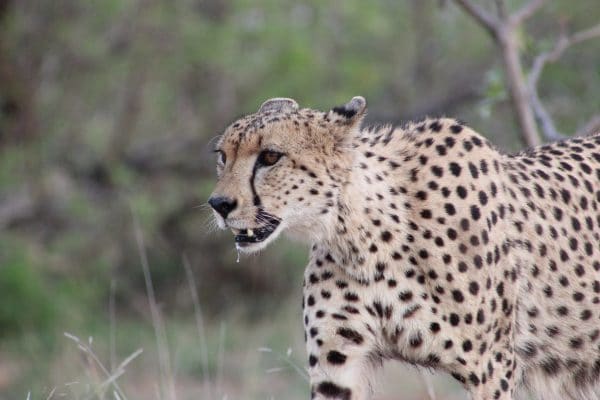 We spent another day maintaining the fence line within the reserve. The service roads were recently graded and the bottom wire of the fence was buried in some places. We spent the day checking the fence and digging the wire up when necessary. Today was well over 100 and this Minnesota girl was HOT!! 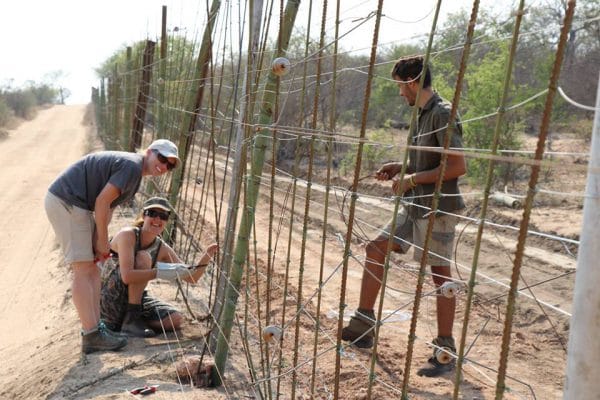 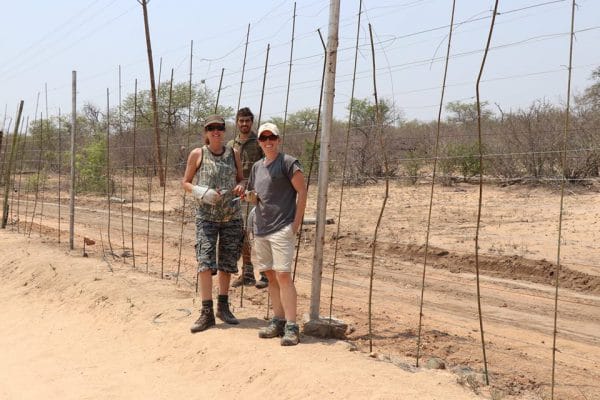 Can you find the set snare in the picture? 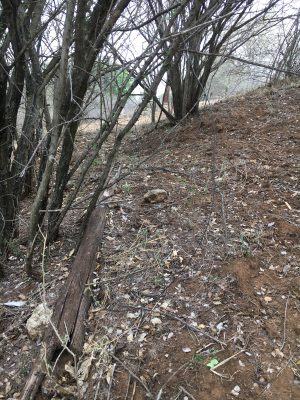 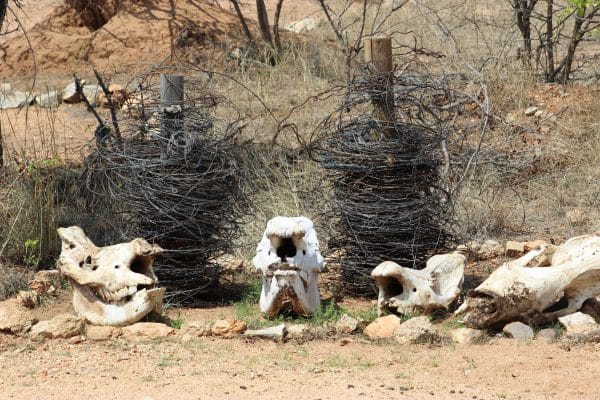 I was able to participate in a new research project documenting the elephant herds within the reserve. The project is an aerial demographic survey of the elephant herds. The goal was to determine how many elephants were in each herd, the location (GPS) of the herd and the age and sex of the individual elephants. To obtain the data, I was able to do a ride along with a nonprofit organization called Flying 4 Rhino and Conservation. Flying 4 Rhino and Conservation provides aerial support over conservation areas that house rhino. We flew in a small South African plane called a Bat Hawk. Rob, the pilot, and I flew two separate days at dusk. I took as many pictures as possible while Rob checked the reserve fence lines and investigated vehicles within the park. The data will supplement the data acquired during the game count census and will aid the warden in deciding the carrying capacity for the reserve. 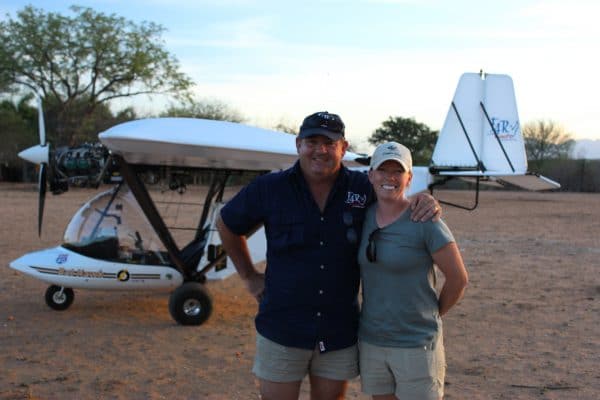 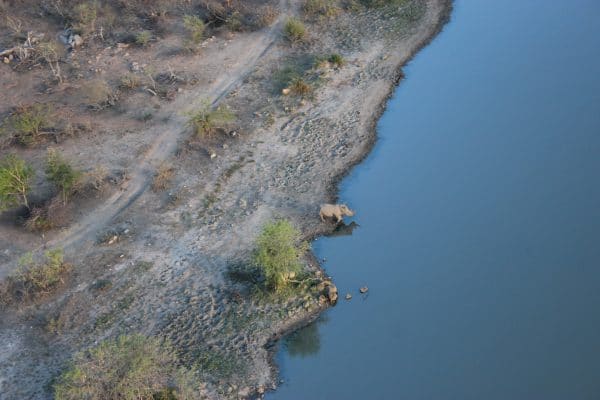 My favorite part of my trip had to be the days spent tracking rhinos and monitoring the camera traps. Balule Nature Reserve is home to approximately 60-75 rhinos of both African species – black and white. A few years back, 20 black rhino were transported into the reserve as part of a rhino range expansion program. To maintain the program, the rhinos are tracked and monitored weekly. Our days began early as we set out to look for rhino evidence at the watering holes, known middens (rhino toilets) and to retrieve the camera trap memory cards. During the day, we observed a number of species that call Balule home including giraffe, greater kudu and zebra. I even saw an adult giraffe taking a snooze in the shade of a large tree!

The first two days we saw a lot of rhino evidence in tracks and middens but didn’t see a rhino in the field. Finally at the end of the third day we came across a white rhino cow and her calf relaxing under a tree!! The female was not in the database of known animals in the area which was good news, she most likely moved in from a nearby reserve and will hopefully call Balule her home. During the afternoon, we combed through the camera trap data to monitor the rhino and elephants using the watering holes as well as documenting which other species were caught on camera. The camera traps are set up at watering holes within the reserve. They are triggered by movement and have night vision. These are used to monitor which species are using the watering holes and used to monitor the usually reclusive black rhinos in the reserve. Thanks for reading about my adventures! – Zookeeper Jill 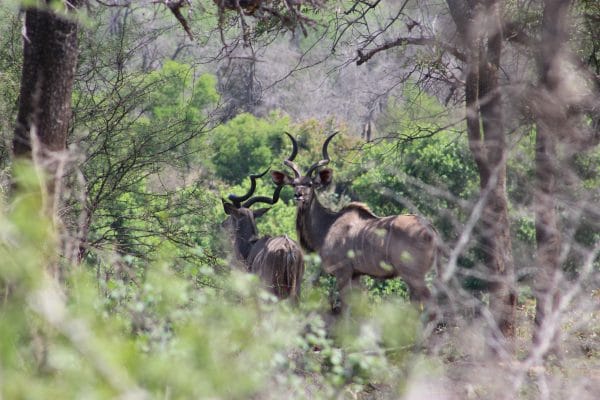 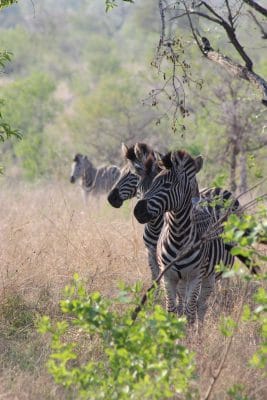 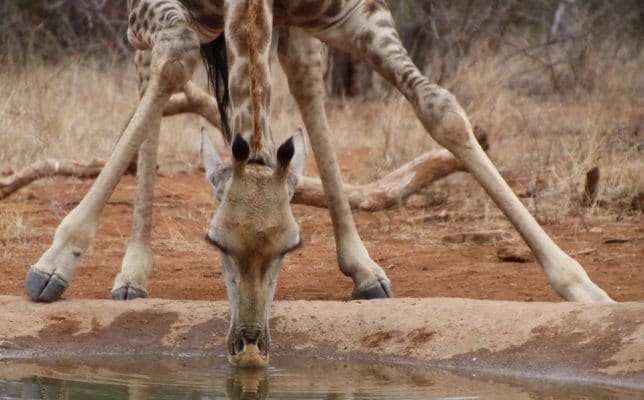 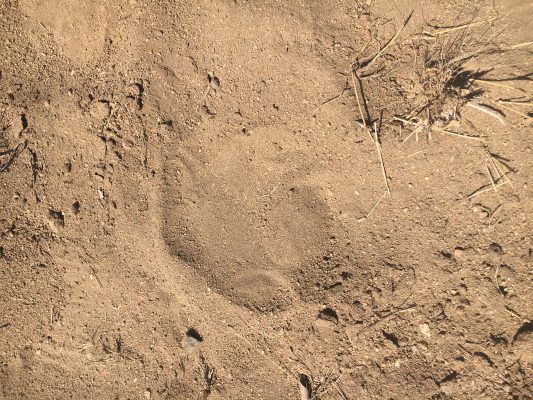 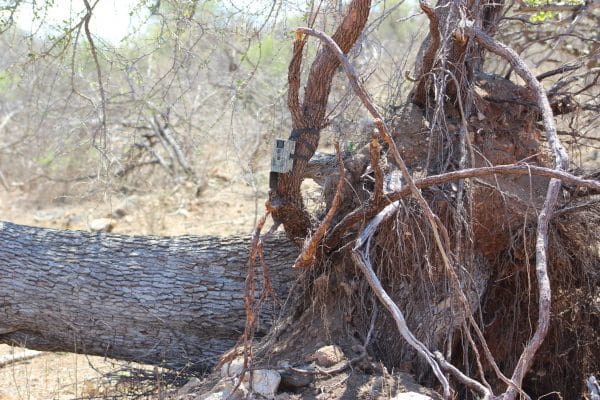 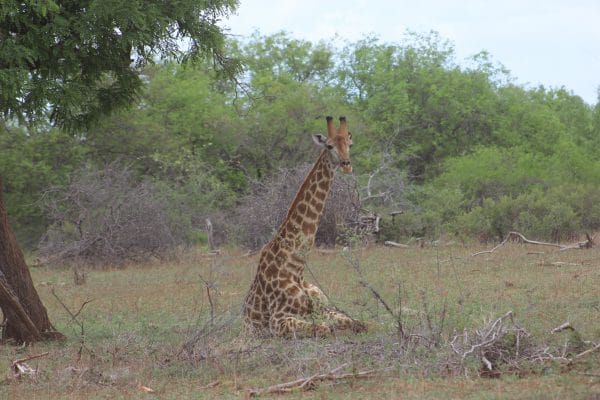 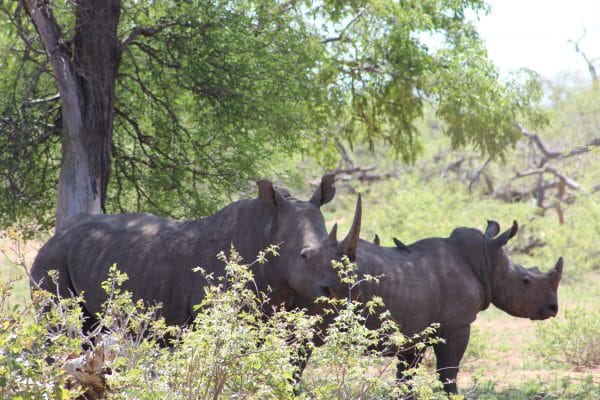 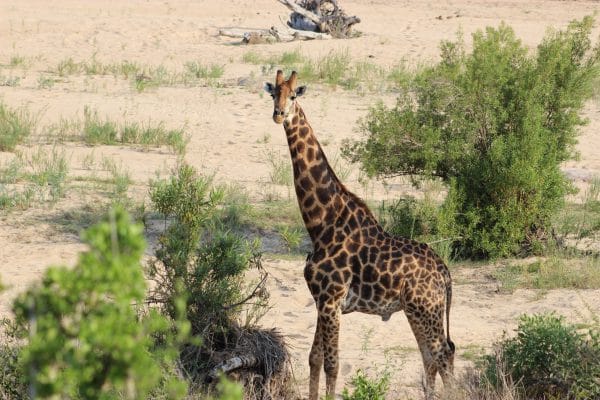